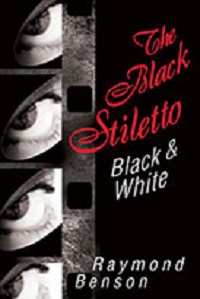 The Black Stiletto is back! The second book of the thrilling new series. It’s 1959 and Judy Cooper, the Black Stiletto, sets out to confront the heroin kingpin of Harlem when the teenage daughter of her beloved martial arts instructor becomes a prisoner in an uptown narcotics den… and she has fallen in love again, this time with an FBI agent who has standing orders to arrest her.

The Black Stiletto was a legend in her own time, an underground heroine who made a name for herself during the late Eisenhower years and early Kennedy years as a New York City vigilante. Although she was wanted by the law and would have been arrested had she been caught or had her secret identity been revealed, the Black Stiletto was a competent and successful crime-fighter. A feminist before the term was in everyday vernacular, she battled common crooks, Communist spies, the mafia, and worse—and was responsible for their capture and, in some cases, their deaths. But the Stiletto disappeared midway through the sixties and was never heard from again. Most people thought she had died, and no one ever knew her identity. Like pinup queen Bettie Page, her mythical image resurfaced in comics and other media during the 1980s and 90s. Millions of dollars were made by others exploiting her likeness and persona. Today, the questions remain. Who was she? Is she still alive? If so, where is she now?

Again, you would think I would read faster with books I enjoy and have the next few in the series. Nope, I drag because I don’t want to let go of them.

What the blurb doesn’t mention is how her son ends up visiting her old haunting grounds meeting up with…that’s enough for now.

I could end my review here with the simple words…I really enjoy this universe, these characters, and Mr. Benson’s writing…but that seems a little lame and a letdown. No matter how true.

Why and who should read this series?  Anyone who is a fan of secret heroes, the saying – only the shadows know. Is the Black Stiletto a hero or nuisance? We’re talking a time period that is pictured in shades of grey. Dark and seedy. Prim and Proper…hmmm, on the surface. A time of innocence, guilt, and hard justice. A female Mike Hammer or Sam Spade? Yesteryear’s Black Canary.

Weaved within is a son still discovering his mom. Being a dad wanting to protect his daughter. A lead female character who cannot speak for herself about her past, only what she wrote long ago.

No, it’s not easy writing a review for a straightforward, simply told story. I hope you give these a try and let me know your thoughts.