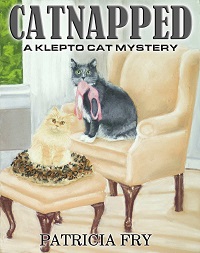 When Savannah Jordan agrees to help her aunt while she recovers from a broken foot, she doesn’t expect to walk into a mystery, become part of a not-quite-legal surveillance team, be kidnapped by a deranged stranger and meet a steaming hot veterinarian. Beloved neighborhood cats are missing—the community can only guess at their fate—and Aunt Margaret’s life is being threatened. Is it because she has a clue to the missing cats or is it something more sinister?

There comes a time when reviewer and editor clash, this is one of those times. It is also a time where my opinion and resume clash with the author’s resume.

I’m not saying I dislike this book. As a reader, I coasted through it. As an editor, I would offer a number of changes. But, I’m the reviewer who has to take both into consideration.

The concept follows right along the cozy mystery path until it feels more like a general fiction or romance that has an under-developed mystery backstory. There’s a comfortable simplistic mystery of missing cats and a cat who likes to “borrow” and hide items. I would have liked more Rags. The love story…two of them…are a tad fast. There is a jarring attempted rape, on-page, that is a bit much for the genre, in my opinion.

Predictable cozy mystery? Not quite.

Negatives? It has elements of being a bit long in telling with moments of rushing; however, this is the first book in the series and my understanding the first of fiction work by the author. I have book two in the series and have no qualms of giving it a read.

We all need time to find our groove. Plus, I now know what to expect.

For me, Catnapped had potential. You may mix better with it.