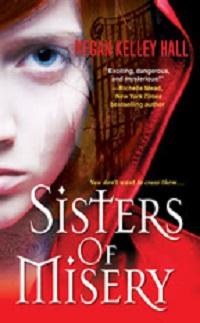 Some Girls Have Everything. Then There Are The Jealous Ones.

Hawthorne, Massachusetts is a picture-perfect town filled with shingled houses and quaint storefronts. It’s a place where status is everything—especially at Hawthorne Academy, ruled by a secret clique of popular, powerful girls known as the Sisters of Misery.

Fifteen-year-old Maddie Crane has done her best to fit in, mostly for her mother’s sake. But then her beautiful cousin Cordelia LeClaire arrives in town, stirring envy and suspicion, and setting in motion a terrible sequence of events. Because Hawthorne is a town filled with secrets, and they are coming to light again…

I believe we’ve all heard that girls can be worse than boys when it comes to cliques and accepting others into their established folds. I remember one woman I worked with stating “How come a new guy comes to the office and all the men take him out for lunch or drinks after work. A new woman comes to the office and every female sits back to see where she fits in.” And how many movies and books, even news stories, do we know centre around someone doing anything to be in with the “in” crowd.

What happens when the new girl doesn’t care? And the new girl is vastly different than anyone in the small town. And, of course, the new girl attracts the attention away from the popular, powerful Sisters of Misery.

I did not expect the story to unfold as it did. I wasn’t expecting the ending. Frankly, everything within these pages went in directions I never imagined. Consider me spoiled (ruined?) by the sameness of other storylines with basic characters…good girl who’s awkward with her “in” friends, makes friends/cousin/sister/whomever who is way outside the “in” group. Arguments happen, pranks pulled, this, that, and the other thing until justice is served and either the bad one is punished or they’re all friends in the end.

Nope, there’s something disturbing happening between these pages. It’s haunting. It’s unsettling. It’s time to try and figure out just who we should be more afraid of…who’s more frightening…more powerful.

While having much the same as most teen dramas, Sisters of Misery also treads along the lines of dark fiction without the lightness found in too many tales today. This I like.

In fact, I liked it so much and was intrigued enough to buy Megan Kelley Hall’s The Lost Sister.