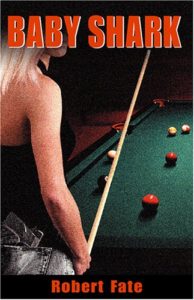 In a roadside pool hall out west of Abilene, Kristin Van Dijk, 17, is forced by four thugs to watch the murder of three men, including her pool hustler father. Shes assaulted and beaten and left for dead as Henry Chin, a Chinese immigrant whose grown son was one of those murdered, saves her and secretly helps her recover. Because the local police show no interest in solving the pool hall crime, Henry hires a private investigator more set on justice than law to start a search for the nomadic killers. Then Henry hires two vets to teach Kristin how to protect herself. She develops into one tough package of trouble as she also perfects her pool. At eighteen, she looks for the thugs as she hustles pool in west Texas and earns the nickname Baby Shark. Revenge is difficult, but satisfying. 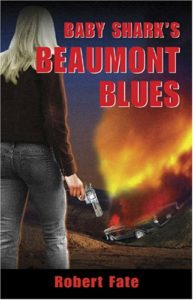 Private investigator Kristin Van Dijk and her obstreperous partner, Otis Millett, have been hired to find kidnapped teen oil heiress Sherry Beasley, who needs to be kept safe until her upcoming eighteenth birthday. 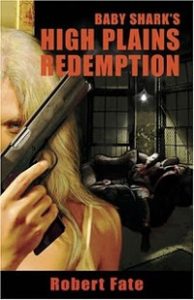 May 1957––When Kristin Van Dijk aka Baby Shark and Otis Millett are hired to deliver the ransom for redheaded Savannah Smike, the mysterious piano-playing girlfriend of an Oklahoma bootlegger, they find themselves involved in more trouble than they bargained for. It is kill or be killed from day one.

Who wants Savannah so badly they are willing to murder anyone who gets in the way? That is the mystery Kristin and Otis confront in what becomes a no-holds-barred struggle between two feuding outlaw clans.

This action-crime-adventure is quintessential Baby Shark. It careens across two states, leaving a trail of blood and destruction from the tough side of Fort Worth through the southern Ozarks of Oklahoma to the lonesome high plains of the Texas panhandle.

This is my first time experiencing Mr. Fate’s writing and I feel I’ve come home. I’m a major fan of Mickey Spillane’s Mike Hammer, not that Baby Shark is Mike Hammer. No, I think Hammer would give this lady a wide berth. Kristin Van Dijk is no nonsense, tough, but never abrasive. Her loyalty to Otis and her reputation comes across clear and well-earned.

Baby Shark is not a cozy read. This is a gritty, time period, no punches pulled, out and out head on fight. The characters are no way sugar coated. Some might say the characters are stereotypes of perceived tough guys; however, stereotypes never read true. These are characters shaped by their experiences, those around them, and life in general. Mr. Fate’s writing is simply straightforward.

Because this is my first reading of Baby Shark, I am missing some background on her. Every series builds its characters, adds more, shows more. Some of Baby Shark I’ve had to fill in for myself and I don’t think I’ve been far off the mark. Mr. Fate’s secondary characters are…will fans get mad if I use the word, fun? They are, fun that is. The secondary characters are fun. I believe them and while I might not want to meet any in real life, here within the pages I like them.

This is a writer’s strength. Being able to bring any character alive and have the reader want them to be real. To forget they’re not.

Baby Shark isn’t going to be for everyone and even for me; I’ll read more cozies between each Baby Shark. Nevertheless, I’ll revisit and live precariously within Mr. Fate’s pages.