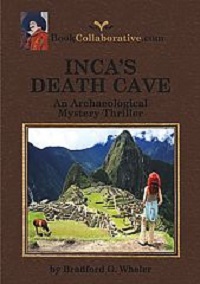 A 500-year-old puzzle catapults an archaeology professor and his brilliant grad student into the adventure of a lifetime in INCA’S DEATH CAVE, a new mystery thriller from author Bradford G. Wheler.

The ingenious thriller is filled with twists and turns, excitement and adventure, archaeology and technology.

A high-tech billionaire sends Cornell University professor Robert Johnson and his beautiful student to Peru to find out what happened to a lost band of Inca rebels who may have left treasure behind. But first, they will have to survive corporate skullduggery and drug-lord thuggery. And, why, 6,700 miles away in Vatican City, is the old guard so upset? What dark secrets could centuries-old manuscripts hold?

Along with riveting action, INCA’S DEATH CAVE contains 22 illustrations and photos. Wheler draws on his expertise in engineering, technology, and business to help readers live the adventure. Mixing the action of David Baldacci’s The Hit, the tech thrills of Michael Crichton’s Jurassic Park, and the dialogue of Robert B. Parker’s Spenser novels, INCA’S DEATH CAVE is a true pleasure to read.

INCA’S DEATH CAVE is a project of BookCollaborative.com and is distributed by the world’s largest book distributor Ingram. It is available on Amazon.com, Barnes&Noble.com, and by order through any bookstore in the US, UK, and Canada. The book is also available in ebook and audio book form.