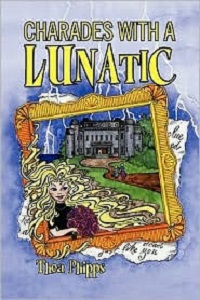 Roses are red, violets are blue. It’s not quite dead, just like you.’

What was the meaning of Desmond’s childish rhyme, phoned to his sisters just days before his death? What unnamed ‘treasure’ of great value did Bella’s crazy great-uncle Desmond bequeath to his family? In a posthumous letter to be hand-delivered to Bella’s great-aunts, Gilead missionaries just returned from Peru to Cornwall, England, Desmond Wildeve spoke of a priceless object hidden in the vast, cluttered family mansion – a mansion no one had been admitted in for nearly fifty years. And he gave them only one clue to start the hunt: another childish rhyme.

Taking on the challenge, Bella, with the help of family, friends, and eccentric villagers, searches for the meanings to the childish rhymes hidden throughout the mansion by her great-uncle. The search leads Bella into comically bizarre situations, including wrestling with mummies, hidden passages, and genealogical secrets as she plays charades with a lunatic from beyond the grave.

I guess it’s not enough to just write: I really enjoyed this book. I laughed and was totally wrapped up in the story and couldn’t figure out how the author would finish it.

Truthfully, this has been one of the hardest reviews to write because there’s just so much fun going on within these pages. Yes, it’s jam-packed. Yes, it’s bizarre and at times you’re running around with the female lead wondering what the heck?

And isn’t that what you want in a read.

I don’t want to be left outside the pages and watch the story; I’ll turn on the television for that. I want to dive into the world either between the pages or in the eReader. I want to feel the emotions of the characters. I don’t want to know what’s coming next or know the ending beforehand. No, give me a read that loses my hours; messes with my sense of reality vs. fictional; makes me bark at anyone who dares interrupts my reading time.

Ask me if I want to revisit Ms. Phipps’ world? Ask me if I want more. Ask me did I get frustrated and angry when CHARADES WITH A LUNATIC ended…the good frustration and angry. The ones where you’re peeved cause the story ended.

And now with this review finally written, I need to move on to the next review; the next book. But, I’ll never let go of CHARADES WITH A LUNATIC.

The Doll in the Wall

“Checkmate to the black king” begins the eerie missive found by Bella. It had been hidden in a pub’s wall along with a cache of toys, a child’s clothes, and a century-old photograph of two children, one of whom is a little boy holding the same doll found in the wall with the note. Who, or what, is the black king, and why is the writer of the message frightened for their life? Who are the children in the photograph? What is the link between the hidden items and a chess game? And most puzzling of all, how is it possible that the abandoned hundred-year-old doll is familiar to members of Bella’s family? Using forgotten photographs, memories, and the game of chess, Bella and her friend Tamsin learn the secrets of the doll in the wall.

Why are dolls so mysterious? Scary. Terrifying. Comforting.

Bella is back as is her family, friends, and the cast of local characters which add all the layers to another entertaining read.

Thea’s storytelling is one of mass involvement. This is another story which is not just a mystery within a small community, it is a complete rambling move through the lives of characters who are intermingled with a hidden tale. But not to be confused with a wordy ramble of nonsense. Sitting down with Thea’s Bella is to check in and stay a while with friends. To people watch and listen in on conversations and relax with the quirks and subtleties of people who come across as those we’ve known all our lives.

There’s a comfort in being with Bella and her family. I’m not one to read much that has a religious angle; however, that’s not how this is brought about within these pages. Church and bible reading meetings are simply part of Bella’s world. There’s nothing preaching. It offers a different manner in which to reach out and talk with people and gather information.

Information that helps the story to unfold and answer the questions about a lost doll, war codes, and personal histories.

Having been taught the game of chess by my father when I was little, I was emotionally touched to see it used within the story. The memories of playing were welcomed as I watched the characters connect with each other over the board, exactly how my dad and I did.

This aspect had me thinking of we use foreshadowing and how we miss the obvious when something is familiar.

With this story we meet Bella’s grandfather. I won’t say much about this character outside of that I like him. He’s something else, but I’m pretty sure we’ve all met someone like him in our lives.

In the end, I’m glad I already have Thea’s next book “Strange Caper” even if I’m way late in getting these read and review written. 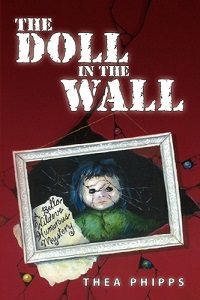 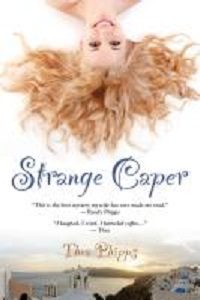 It was to be an idyllic Greek holiday, courtesy of Albert and Violet, retired field agents for MI6. But, when the Frenchman entered the picture, not to mention the bipolar policeman and Serbian acrobats, everything changed. Instead of fleeing to safety, Bella ends up trapped on the naturists’ island of Gavdos. She becomes ensnared in kidnapping, smuggling, and in trying to understand the puzzling brass key that will save them all…