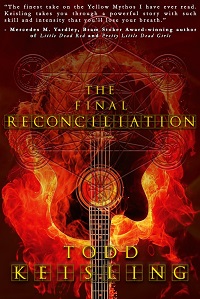 TAKE OFF YOUR MASK.

Thirty years ago, a progressive rock band called The Yellow Kings began recording what would become their first and final album. Titled “The Final Reconciliation,” the album was expected to usher in a new renaissance of heavy metal, but it was shelved following a tragic concert that left all but one dead.

The sole survivor of that horrific incident was the band’s lead guitarist, Aidan Cross, who’s kept silent about the circumstances leading up to that ill-fated performance—until now.

For the first time since the tragedy, Aidan has granted an exclusive interview to finally put rumors to rest and address a question that has haunted the music industry for decades: What happened to The Yellow Kings?

The answer will terrify you.

Inspired by The King in Yellow mythos first established by Robert W. Chambers, and reminiscent of cosmic horror by H. P. Lovecraft, Laird Barron, and John Langan, comes The Final Reconciliation—a chilling tale of regret, the occult, and heavy metal by Todd Keisling.

Damn, I want to start this review differently but I’m afraid it would give something away and by no means do I want to give anything away. Yes, that sentence ran away from me and my mind. But, dangit, this book is GOOD!

One of the few books I can’t wait to get back to. My quick notes came as the following:

…who wouldn’t want to interview an aging rocker with a mystery surrounding him and his band?

…by using real names, known rockers, fits. Gives a reality to the fiction without changing anything about the real groups and people. Brings us into the history of the character(s).

I am haunted by the story, mostly by the main character. I would even say mesmerized. I want to keep reading, but I don’t want the story to end.

Damn, had another line I wanted to type but that also might give something away.

Ugh, what do some authors do that to me?  LOVE it, when they do.