What if a retired NYPD officer is asked to investigate a mysterious death at the National Authors Conference where various attendees offer their theories and suspicions?

While Agapé enjoys getting a chance to exercise his old skills, his wife of over forty years, Geraldine, isn’t pleased. She teaches English at Maui Community College and talked Agapé into volunteering as head of security for the National Authors Conference where she volunteers in the bookstore.

Peopled by a cast of quirky and deliciously amusing characters, Murder … They Wrote will quickly engage the reader. It is filled with accusations, theories, twists, turns and surprises. The authors each have unique personalities and bring them to the creation of the fictional authors.

First impressions….don’t let this end. Which also explains why it took me so long to finish and then to write my review thoughts. I love this character. He’s comfortable, approachable, and I just want to hang out with him. His wife is a match, too, but I believe I’ve developed a crush on Agape.

There’s a description of Jones, finding someone to identify with, that hit the mark for me. It was a simple paragraph, not that big a deal for the book’s story, but a deep sense of the character Agape.

Also, think the ease of Magnum P.I. but calmer.

A strong mystery will give you the clues to solve and then back up the solution given. The best ones have you saying – how could I have missed that! For me, this was the case.

I’m curious if the story and characters are true, based on truth? Wishful thinking on my part? Probably. Hey, we can all dream.

If you haven’t figured it out yet, I enjoyed this read. I liked the main characters and all the secondary and sub-characters. Their relationships with each other and am happy this is a series.

My first reading from Lorna and Larry was their non-fiction “31 Months in Japan” and their style remains the same…easy going storytelling. My favourite type of relax go-to.

Given my bad timing, I wish I could write more, but seriously, when something is good; it’s just plain good. 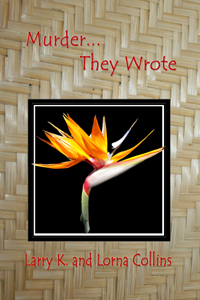 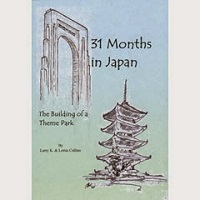 31 Months in Japan: The Building of a Theme Park

One day in the summer of 1998, Lorna Collins stepped off a train into a sea of black heads and realized she was foreign and in Japan to stay. She and her husband, Larry, had relocated to build Universal Studios Japan® in Osaka. 31 Months in Japan: the Building of a Theme Park is their account of that experience.

While in Japan, they encountered the wonders and frustrations of the culture as well as the challenges of conducting business following foreign formal rituals. As Southern Californians, Japanese customs seemed awkward at first, but eventually they established effective working relationships and personal ones as well.

If you enjoy foreign cultures, are curious about the behind-the-scenes workings in the entertainment industry, are interested in the nuances of doing business with the Japanese or simply enjoy reading a well-told and engaging story, 31 Months in Japan is for you.

The best part of trips away from home are writing letters back home. Larry and Lorna (after spending this much time with them, it feels weird to say Mr. and Mrs. Collins) have done just that with their book, this reads as letters home…to friends. At the end I was smiling tears. Too many times I’ve read accounts of visits to other countries and the culture and people are missing…dare I say disrespected, overly compared to North America life and what’s better and what’s not.

Larry and Lorna, they share with open arms and open hearts. Everything is a new adventure, a learning, a welcome. There is an embracing which pulls you along with their journey. This was the smile at the end. The tears came from the connection made to people and learning some are no longer with us. You would think it would be easier to connect to a real person versus a fictional character, no. I’ve noticed people tend to read over strangers in non-fiction or bios, they’re not as important as the individual(s) you picked up the book to read about in the first place. Not here.

Have you ever wondered about the work behind making a theme park? I’ll be honest, I never have. Never gave a thought beyond the behind scenes of the shows at the parks. Never thought of plant placement. Pavement types…hardiness. Or placement of toilets…and here in another country, the different types of toilets.

I’ll never look at another theme park the same again. I’ll appreciate it much more.

Something more came from reading “31 Months in Japan…” though. Being a team.

Whether your team is made up your spouse, family, friends, co-workers, those from a different culture…becoming a team is always possible.

I’m sad to say “31 Months in Japan…” is the first true life recount which has hit my heart. Thank you, Lorna and Larry.

Yes, I know Lorna via Facebook. We’ve “liked” and made comments on posts. I’ve learned of her Japanese “family” and the worries over the years…The Fukushima Daiichi nuclear disaster of March 11, 2011. I share this because lately I’ve read more and more on how reviews written between people who know each other can’t be “true” reviews. Well, that’s hogwash. That insinuates a lack of trust and integrity on both author and reviewer. Our connection came about because of “31 Months in Japan…”

Thank you Lorna and Larry for “31 Months in Japan…” and introducing me to everyone and everything behind, within, and beyond a theme park. And for the cyber connection of the world made both small and large by the Internet.

Get out the Kleenex you’ll need it.  Not only are the stories within “Snowflake Secrets” uplifting; they’re tearjerkers that had this non-romantic wrapped around their authors’ little fingers.

Lorna Collins opens with the Prologue introducing us to the sisters as children.  Everything is perfect, picture perfect.  Ms. Collins then brings us Allegra’s story.  Life was supposed to be perfect, but as Allegra learned “Be careful what you pray for.”

Ms. Collins wraps up the sisters’ stories with the Epilogue.  Life isn’t wrapped with bows, but sometimes we know when new beginnings are born.

Sherry Derr-Wille brings us Carole’s life.  The lonely life of a widow who feels she can never satisfy her mother.  Will she have a new beginning?

Christie Shary’s Sonata is the hardest to read, but the most hopeful.  Here is the sister who never felt lost, the odd gal out.  The traveler.  What is her secret and how was it she always knew what Aunt Maude was giving with those snowflakes so long ago?

“Snowflake Secrets” is about family seen through others’ eyes.  What we picture as a whole and what we see alone.  It is individuals tied together during times of not knowing, not wanting, rediscoverying.

Maybe I’ve read more into these tales, maybe I’ve just connected because of my own family, maybe there’s just always something more for each of us when we’re emotionally touched by someone’s words.

Thank you, Ladies for the pleasure of your words. 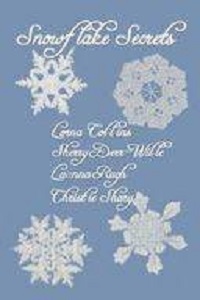