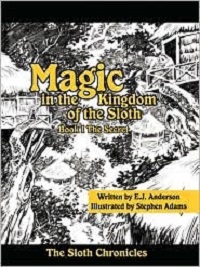 Have you ever seen or observed a sloth? If you have you too will wonder how such a species could have survived all this time. Now imagine a long time ago they practiced their own brand of survival by means of magic. A magic so ancient that we have forgotten all about it. In a chronicle of books we trace this race to it’s origin and evolution. “In a Kingdom long hidden away existed a community that lived by philosophical truths”.

And hidden secrets that were passed down through one of their lines of Priest.

Ebbard is a sloth of thirteen. He’s being trained by his ‘grandfather’ Malik to take over as the master magician for their community. It appears Malik acts as the guide, priest, of the community. One who teaches through sermon-like lessons at the daily sunrise ceremony. However, in the last few pages we learn of a secret. It would seem Malik knew the human great-great grandfather of the character who has translated this story. Why and how we don’t know as the story ends with Ebbard bringing about a fog to hid his community from some danger.

Here’s the main disappointment…the story is left unfinished. The cover does carry “Book I The Secret” however, this still needed something a little more. Perhaps telling us what it was Ebbard was hiding the community away from, some story question answered. As it is, I feel like I’ve read a proposed storyline, a first draft waiting to be fleshed out.

Sadly, I’ve been unable to find anything more by the author or any more books under the series name “The Sloth Chronicles” or the author. I’m hoping this review finds its way to him/her and maybe we’ll learn more.