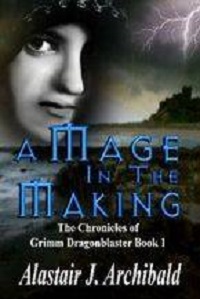 The Chronicles of Grimm Dragonblaster Book 1: A MAGE IN THE MAKING

Ever wonder what it takes to become a Mage? Ever wonder about the relationships between Mages and Witches?

Join seven year-old Grimm Afelnor as he enters Arnor Guild House on his journey to become a Mage. Will he discover why his dearly beloved grandfather is known as the “oath-breaker” and will he redeem the family name? From his first appearance on the page, there is something about this character that will draw you straight to him.

I am truly enjoying this series start. This story comes after our world has destroyed itself and a new power is found – magic. This talent develops differently for men and women. Women need the physical contact between them and Mages to strengthen their power. So, it is through the greed for more and more power, that women (witches) eventually fearing for their existence as the Mages take the oath of celibacy. One lone witch plots to have her sisterhood rise again. Given the beginnings of this pledge, I’m not so sure that’s a good thing. However, I have high hopes that Grimm will bring both Mage and Witch back together.

I like how Mr. Archibald has incorporated the history of his story’s time through his opening narrative. This adds to the believability that this isn’t just a fairytale but the reality of our world’s fight to survive and evolve. Watching Grimm grow up from childhood to Mage is as much a complete story as it is a set up for the history of Mages and what is to come.

Within these pages you will find magic, family, betrayal, friendships, secrets, quests, intrigue, but mostly you will find a good read.

I’m looking forward to the next in this series. 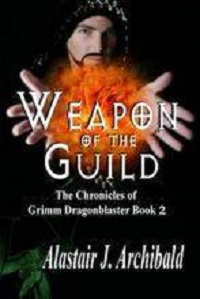 CHRONICLES OF GRIMM DRAGONBLASTER BOOK 2: WEAPON OF THE GUILD

At the Whiskey Creek Press site this is listed as “Readers’ Choice #1 Bestseller.” Want to know something…it deserves it.

In “Weapon of the Guild” we learn this is the informal title of Questors, as Grimm is now one.

Grimm’s first quest, under the guidance of Questor Dalquist Rufior, was an exciting adventure full of the dangers and powerful foes Grimm can expect to encounter as a Questor. Then Mr. Archibald lays out the mundane quests Grimm can also expect, something that bores the young mage.

When Grimm visits High Lodge, we witness the snobbery of the ruling house of mages. I’m reminded of the bustle and hassles of any governing seat whether in other fantasy stories or even every day fiction. These places can hold such wonder and excitement, for those who do not live within their walls; however, Grimm learns they can be more boring than home. These men are more paper-pushers and bureaucrats than the mages they’re suppose to be.

What Mr. Archibald also gives us here is our first encounter with Lord Thorin’s mother – Reverend Mother Lizaveta. Here we glimpse her plans for Grimm and her power.

Mr. Archibald adds depth to his character, Grimm, by the introduction of Grimm’s addiction to an herbal mixture. This mixture was needed during Grimm’s first quest; however, Grimm discovers this simple herbal mix holds a great power over him. Grimm now has a ‘flaw’ if you will, but it is something that reminds us of his strong internal will…something I believe he will need.

Mr. Archibald builds Grimm’s world through plausible secondary characters and settings. Some characters are background faces to make up the feel and rules of a town’s setting. Others are characters of questionable history, the thief with a heart of gold or the dashing rogue or overlooked brain of an oafish-looking being. Which one is needed for the quest at hand?

In “Weapon of the Guild” we are left wondering if Grimm will survive his latest quest. I’m very happy I have book three on hand.

Without any doubts I state The Chronicles of Grimm Dragonblaster series is a must read. 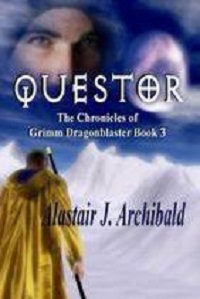 In a battle between magic and technology which would win?

“Questor” sees my favourite Mage, Grimm, continuing the journey started in book two “Weapon of the Guild” where we left Grim and his companions slowly freezing to death. Their quest – find and defeat General Quelgrum. Is General Quelgrum holding and brainwashing Mages? Surely, no Mage would turn against his House and side with a technologist.

Also, from book two, will Master Questor Xylox make good on the promise to see Grimm stripped of his status?

These questions are answered in “Questor” however, I must admit to disappointment in the quick ending battle between Technology and Magic.

It is my opinion; “Questor” is the set up book for the next grand adventures and surprises in the Chronicles of Grimm series. It addresses the issue of what happened to technology, as well as setting up a power base for Grimm in what, I believe, is a future final battle. It plants the seeds of what might have happened to Grimm’s grandfather and a new era for Mage Magic.

Grimm and his friends, and foes, are not characters I’ll soon forget. 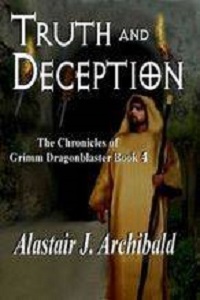 TRUTH AND DECEPTION: BOOK 4 OF THE CHRONICLES OF GRIMM DRAGONBLASTER
By Alastair J. Archibald

Grimm receives his cognomen!  He is now officially–Grimm Afelnor, Mage Questor of the Seventh Rank, called the Dragonblaster—at seventeen is he ready for the responsibility?

Now is the start of Grimm’s true quest, the quest to clear his grandfather’s name.  Lord Prelate Thorn doesn’t mind this quest as long as it only brings down his mother, the witch Lizaveta, and not him as well.  With Lizaveta destroyed, Thorn can stay being Lord Prelate…as long as Grimm never learns of Thorn’s own involvement.  Then again, maybe Grimm won’t survive.

“Truth and Deception” is clearly the start of Grimm’s final battle.  Numal, who has just earned the title Mage Necromancer, joins him, you may remember him as an Adept Grimm met on his first day.  Numal’s the older gentleman who wanted to be a clown and not a mage.

Crossing Grimm’s path and joining as well, is Lizaveta’s grandson, Questor Guy “the Great Flame” Fulinar.  Guy is arrogant, rude, egotistical, and above everything else determined to obliterate his grandmother.  Who is Guy’s father and does Lizaveta really not know of her grandson?

My favourites are also back: Tordun, Crest, Harvel, and new compadre, General Quelgrum.  Yes, demon storyteller, Thribble is here, too.

As with all fantasy quests, who will survive?  Mr. Archibald, please don’t kill any of my favourites.  Then, again, every good story requires sacrifices.

And The Chronicles of Grimm Dragonblaster are good stories.  Mr. Archibald has created a world that does not have to end with this quest.  His characters could contain onto new quests against new adversaries.  The background Mages are interesting enough to carry their own stories, too.

I have two more Grimm books to read, I will be lost once done. 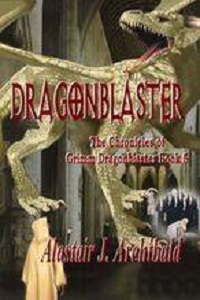 Redemption, vengeance, pride; they all have a heavy price.

In book four of Grimm’s Chronicles, TRUTH AND DECEPTION, Grimm was given permission to track and destroy the witch, Lizaveta.  Not knowing she was his Lord Prelate’s, Thorn’s, mother, as well as the downfall of Grim’s grandfather.  That quest was Grimm’s first taste of the possible consequences he, and his friends, may have to pay to reach his goal.  What consequences will be paid in DRAGONBLASTER?

And there are consequences.  Mr. Archibald wrote a few surprises, which were good for the story, if unlikeable for this reader.

I found DRAGONBLASTER to be the series’ semi-standalone book.  The full success of this book depends on knowing some of the previous four books.

Grimm and his cohorts are also changing.  Their shine and gallantry are starting to dull.  The faith in Grimm, theirs and his own, is slowly unravelling.  Is this a quest of redemption and valour or revenge?

DRAGONBLASTER is a turning point.  I’m no longer sure Grimm will succeed.  If they succeed, will Grimm survive?

Mr. Archibald has wavered a little in his telling.  Where Grimm was once the sole hero, Mr. Archibald is pulling previous unthought-of strengths and resources forward, will they enhance Grimm or end up battling him, I don’t know.

One book left and I’ll have the answers.  Then what, Mr. Archibald…more? 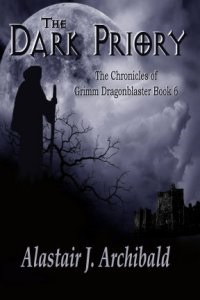 THE DARK PRIORY: The Chronicles of Grimm Dragonblaster Book Six

UPDATE: Have just heard from the publisher…there will be more Chronicles of Grimm Dragonblaster books! This is not the conclusion! While this doesn’t fully change all my emotions about DARK PRIORY it does add a major change…turns DARK PRIORY into a intriguing transition of story. I have no clue where Mr. Archibald will take us…my favourite position to be in a series.

Furthermore, we may have a few stories centering around some secondary characters. Will my favourites be in this batch? Fingers crossed.

After winning free of the dream city of Brianston and defeating the titanic dragon, Gruon, Mage Questor Grimm Afelnor and his companions march towards Rendale Priory to confront the evil witch, Prioress Lizaveta. Unbeknownst to Grimm, who has now lived up to his Guild soubriquet of ‘Dragonblaster’, Lizaveta knows of the party’s approach, and she has magically kidnapped the young mage’s secret lover, Drexelica. When the Dragonblaster reaches Rendale, the evil Prioress will be ready for him.

I have thoroughly enjoyed this series; however, I can’t say I loved the ending. Sadly, I didn’t enjoy the ending or end treatment of Drexelica. This light and loving character was treated to an abrupt and negative treatment. In the end most of the female characters felt unreal and too one-sided.

While I have watched Grimm’s determination to right the wrong against his grandfather, again there felt something lacking in the change over his grandfather. I can’t give too much away as to what happens to Grimm’s grandfather, but a balance was missing.

I’m unsure as to whether Mr. Archibald meant for this to be the complete end or not. It felt unfinished, rushed. I don’t mind characters not staying shining, but for me there was something ‘off’ in this, book six of a wonderfully fun series.

I’m open to hear from others.