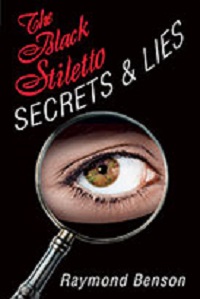 The Black Stiletto is back in the fourth book of the thrilling five-book saga. It’s 1961, and Judy, the Stiletto, meets Leo, a charismatic man who convinces her to move to Los Angeles when she is “run out” of New York by increasingly hazardous police heat. But Leo, who has connections with the West Coast mobs, has plenty of skeletons in his closet. His mysterious sister, Christina, who once served time for armed robbery, could also be a threat to the Stiletto’s new life in California. Meanwhile, in the present, Alzheimer’s-stricken Judy takes a turn for the worse as Martin comes to grips with the imminent end of his mother’s life. And when elements from the Stiletto’s past once again appear to threaten Martin’s family, it is up to his daughter, Gina, to step up and take matters into her own hands.

Melancholy…a feeling of sadness usually without cause. Okay, my cause is the Black Stiletto and coming to the end of her stories. It’s a sadness of what Secrets and Lies brings us to as well as the anticipation of what’s next.

At first I didn’t want to have anything to do with Martin’s chapters. He was there for an intermission from the Black Stiletto’s adventures, an interruption. Given what happens in this stage of the series, I’m feeling more for him and what’s coming. His unanswered questions and the fears he’s recognizing.

This series is such an easy read that you might think why spread it over 5 books. Is it worth it? That’s the craft of strong writing and storytelling. Mr. Benson has kept it clean and simple. A straight knockout.

Your imagination will enhance, fill in any details, the scenes, emotions, action without any awareness on your part. I went back over a few scenes to see if what I pictured mentally was what was on the paper/screen…bits were, I coloured in the rest.

I think I know some answers. Think I know where the last book will take us. I’m not completely sure. I want to jump in and rush. I want to move slowly and savour. I’m afraid of the ending coming and I can’t wait.

The Black Stiletto is a favourite and I can’t tell you how much I think you should visit her world.